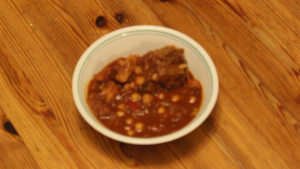 It is not very often that my father prepares something exotic for us. Growing up in Manila in the 70s and 80s was quite an exciting time. The Philippines was under Martial Law and it was also the start of civil disobedience which led to the People Power Revolution in 1986. During these turbulent times …

END_OF_DOCUMENT_TOKEN_TO_BE_REPLACED

Permanent link to this article: http://dadshomecookedmeals.com/2018/01/callos-1-0/

END_OF_DOCUMENT_TOKEN_TO_BE_REPLACED

Permanent link to this article: http://dadshomecookedmeals.com/2014/12/pork-spare-ribs/